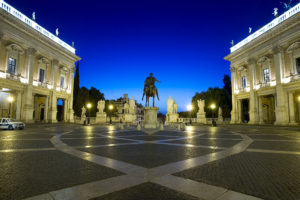 Michelangelo in Rome: Where to Find his Greatest Works [Map]

10Michelangelo di Lodovico Buonarroti was born in Tuscany in 1475 and died in Rome in 1564 at the age of 88. Considered among the greatest artists of all time, Michelangelo is perhaps the original “Renaissance Man,” exhibiting flexibility and genius among various artistic disciplines, including sculpture, painting, architecture and poetry. He is known for changing the discourse of Western Art during his lifetime in what is considered today the High Renaissance. His works are prominently displayed in primarily Rome and Florence as well as other cities in Italy and internationally.

Several of his greatest works in Rome – the Piazza del Campidoglio, St. Peter’s Basilica and the Pietà sculpture inside it, as well as his sculptures of Jesus with the cross and Moses as part of the tomb for  are all available for viewing completely free of charge. The Sistine Chapel requires a paid visit through the Vatican Museums.

We’ve put together the following map to help you plan your itinerary to visit all of Michelangelo’s greatest works in Rome. 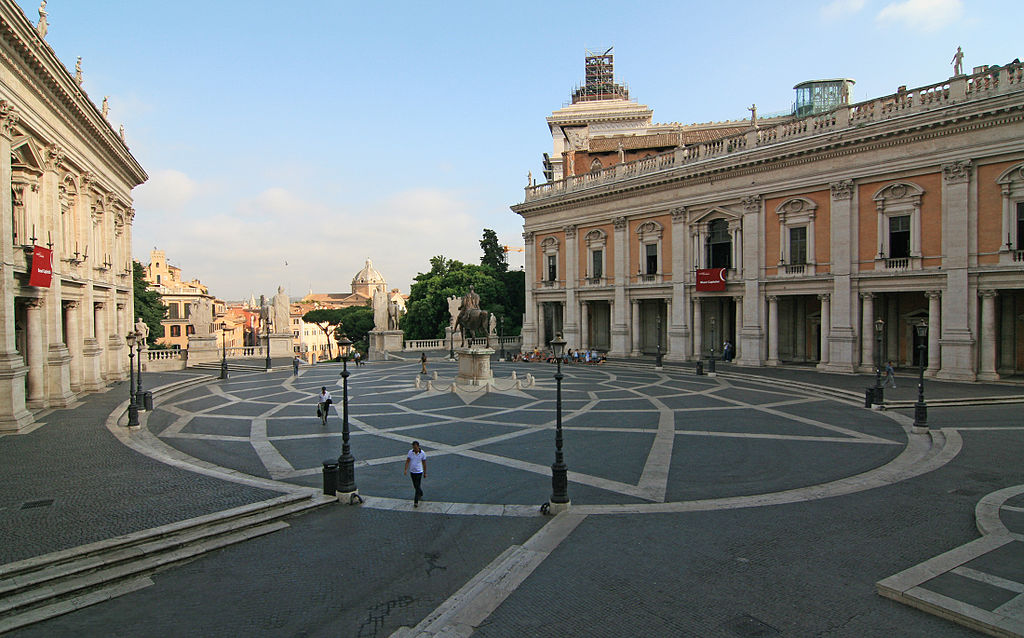 Though Michelangelo was the master architect of Piazza del Campidoglio, he unfortunately saw little of it realized during his lifetime. The Campidoglio is located atop the Capitoline Hill, which derives its name from “head” meaning the most important of the seven hills. Originally the site of temples turned government buildings, Michelangelo’s intervention was quite radical, literally rotating the site about 180 degrees to both physically and metaphorically turn away from the ruins of ancient Rome and face the new, expansive part of the city as well as the Vatican.

The Piazza del Campidoglio is made up of the Palazzo Senatario in the center flanked by the Palazzo dei Conservatori and Palazzo Nuovo. The former two buildings were renovated by Michelangelo while the latter was constructed and designed to add symmetry (hence the name Palazzo Nuovo / New Palazzo). The shape of the piazza is a trapezoid due to it’s sloping nature as well as the fact that the two existing buildings on the site were not constructed at a right angle. The geometric pavement was designed by Michelangelo but not executed at the time the rest of the works were carried out since the pattern was considered in contrast to the Catholic values of the Popes. The pavement was eventually laid by Benito Mussolini in the 1940s.

Today Piazza del Campidoglio is home to the Capitoline Museums, which contain some of the most important ancient Roman artefacts to survive 2,000 years. Among them is the original statue of Marcus Aurelius on horseback located in the center of the piazza (the statue currently in the piazza is a modern bronze-cast reproduction). 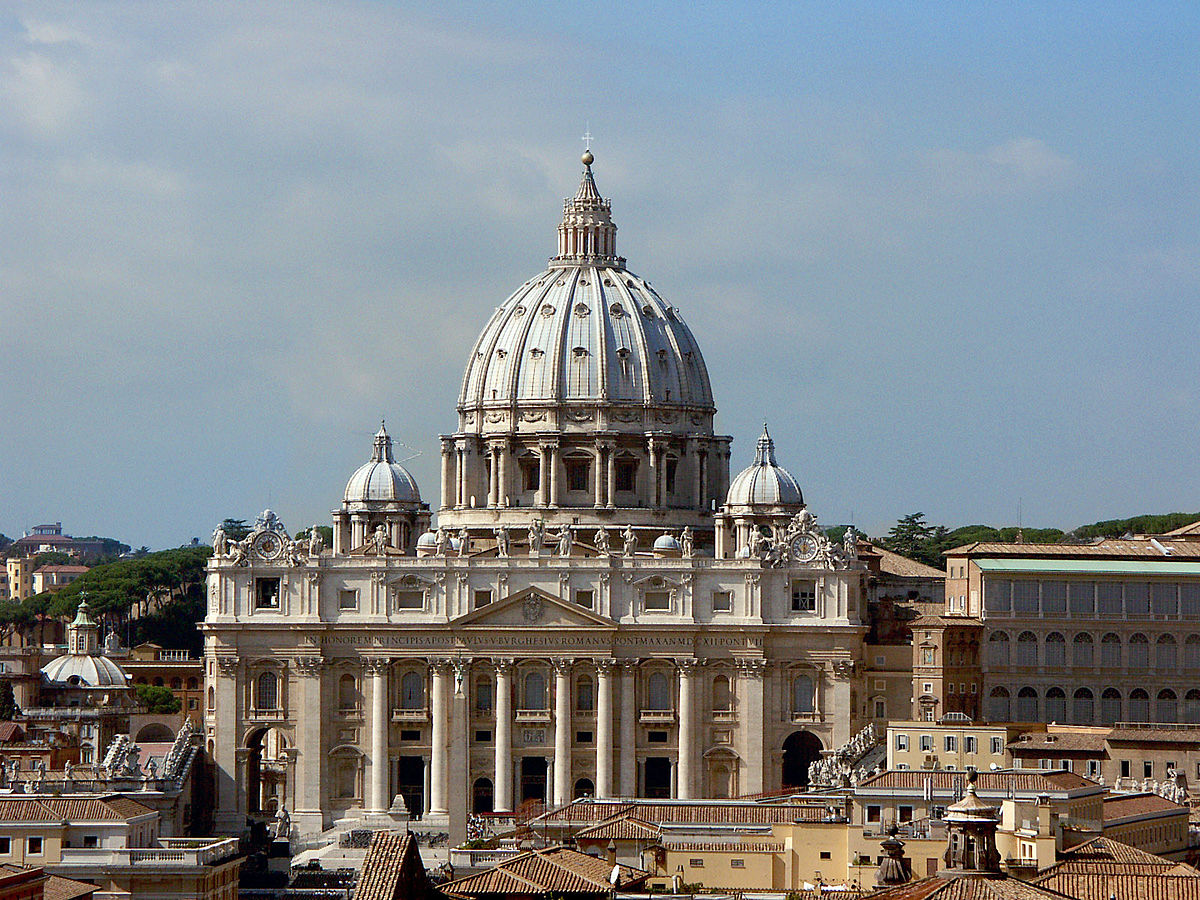 St. Peter’s Basilica is a masterpiece signed not only by Michelangelo but also Donato Bramante, Carlo Maderno and Gianlorenzo Bernini. Michelangelo’s hand graced primarily the dome which was a redesign of the Pantheon-inspired design of Bramante. The dome features a “double skin,” a construction method made famous by the duomo of Florence, designed by Brunelleschi.

Today you can visit the dome of St. Peter’s Basilica by walking up to the dome’s lantern. A set of stairs make the top of the dome accessible by literally walking between the two structural “skins”. It’s not an activity for the faint of heart or anyone who suffers from claustrophobia. The way up and the way down are separate, and the narrow staircases allow for a single-file procession. It’s not recommended that you visit the top of the dome during the heat of summer as the tight space tends to get quite warm and not well ventilated. But if you’re able to brave the way up, you’ll be rewarded with a stunning view of Rome, with the oval-shaped St. Peter’s Square below. 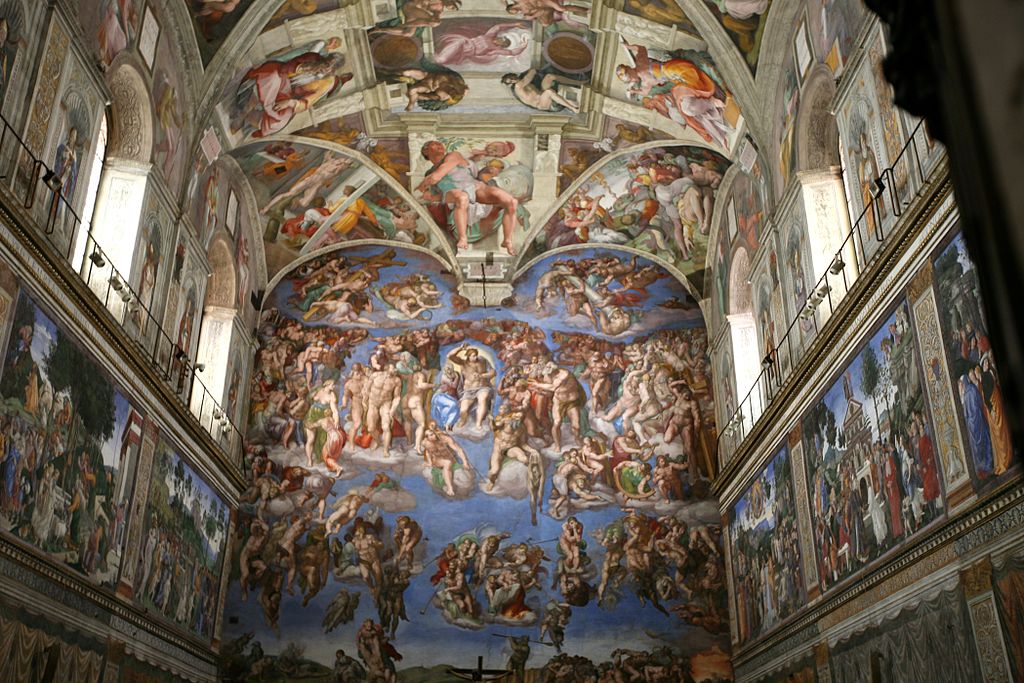 The Sistine Chapel is likely Michelangelo’s most famous fresco painting, covering the entire ceiling and walls of the Pope’s private chapel. The frescoes depict famous stories from the bible, including the final judgement day. The impressive work was completed toward the end of Michelangelo’s life, which would have made painting excrutiatingly difficult – think long days on high scaffolding with your head cocked up and keeping a steady hand.

Michelangelo’s Pietà is a magnificant masterpiece of genius craftsmanship, depicting Mary with Jesus in her arms after his body was taken down from the cross. The emotion represented in the marble is astounding: the sadness in her eyes, the fragility of the position, the realism of the folds in the fabrics, the weight of Jesus’ body in her arms. While the theme of the pietà is one of many, the sculpture by Michelangelo is the work of master.

The sculpture was commissioned by French Cardinal Jean de Bilhères in 1498 for the Cardinals burial tomb. It is sculpted in fine white Carrara marble from northern Italy and is the only work Michelangelo ever signed.

If you plan to visit the Pietà in St. Peter’s Basilica, you’ll find the statue on the right-hand side of the Basilica, just as you enter the church.

Michelangelo’s Jesus is housed in an unassuming church just behind the Pantheon, in Santa Maria Sopra Minerva. The rather indistinct facade doesn’t give away the treasure that it contains inside. The sculpture of the muscular Jesus bearing his cross was completed in 1521. It’s located unceremoniously left of the altar privy to view for anyone who happens to wander in from the street. 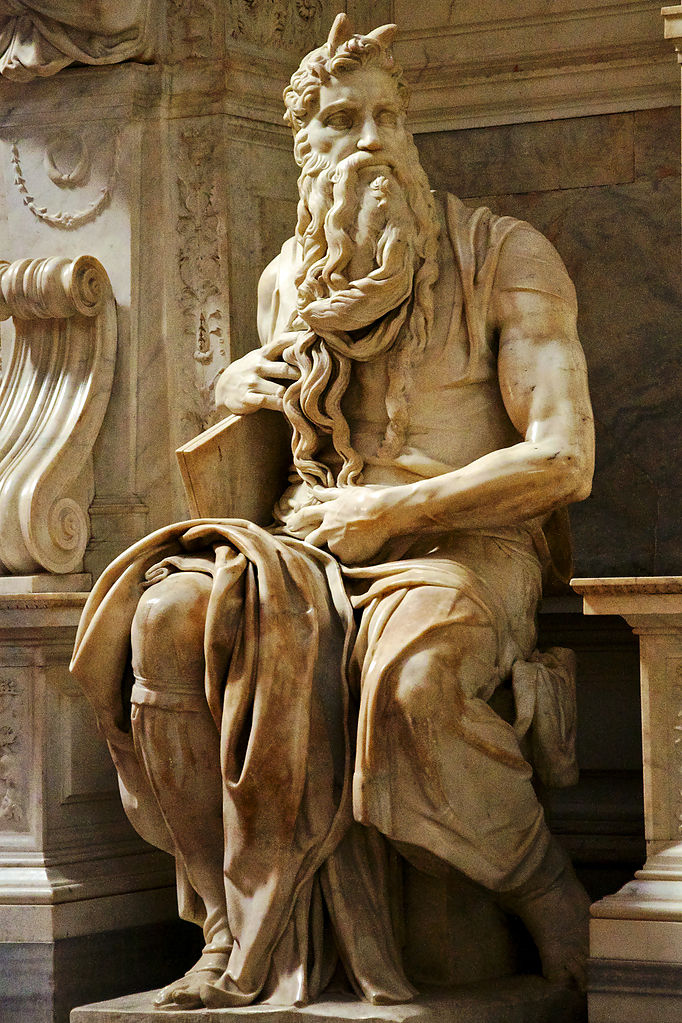 The seated Moses statue is part of an entire wall composition that was commissioned by Pope Julius II in 1513 to decorate his tomb. The original design was quite extensive, including over 40 statues while the final execution features just a handful with the prominent Moses seated in the center. The sculpture is notable for the wise and powerful gaze of Moses looking off to his left, and the vital, life-like and transient position in which he’s seated. The sculpture is located to the right of the altar in St. Peter in Chains church located near the Colosseum. 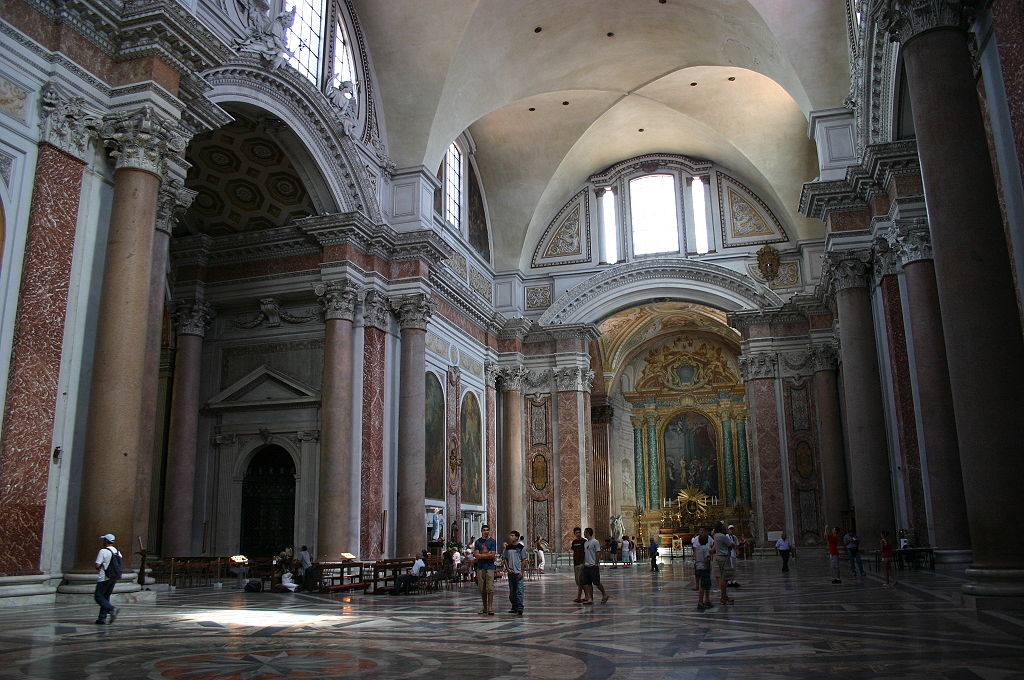 One of the lesser known masterpieces by Michelangelo in Rome is church Santa Maria degli Angeli e dei Martiri, that was built inside the ruins of the Baths of Diocletian (now Piazza della Repubblica) in 1563-4. The entrance of the church is rotated from it’s usual location at the far end of the long side, opposite the altar. In this case, upon entering the church, the perspective is off because the church appears more wide than long. Since the space is an adaptive reuse of the ancient baths complex, the proportions of the space are based on those of Roman times (and not the harmonic proportions that informed most Renaissance church designs). So the grandeur you witness is truly the scale of Roman times which makes the marble-clad interior even more magnificent.

Enjoy renaissance and baroque masterpieces in the privacy of your own home! 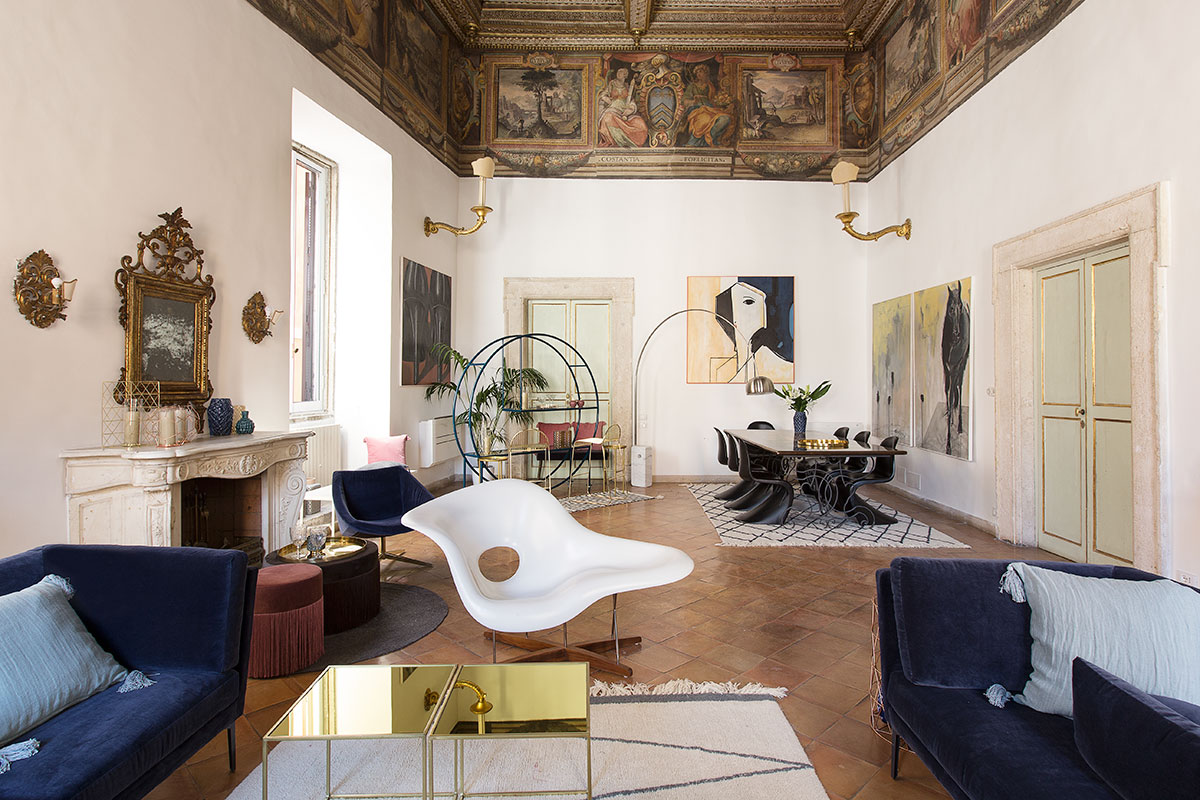 The Costaguti Experience by ROMAC is a one-of-a-kind vacation rental experience for up to 12 guests. The 5-bedroom, 6-bath apartment is located on the piano nobile (first floor above ground level) of a historic, noble palace located in the Jewish neighborhood of Rome. Sixteenth- and seventh-century frescoes by some of the Baroque’s most influential painters decorate the ceilings that loom 26-feet above your head. After a day site-seeing the Eternal City, retreat to this luxury accommodation for a relaxing bath, a steam in your private sauna, a friendly game of pool in the billiards room, or stretch out on the sofa and catch a flick on the smart TV.

Book directly through ROMAC for the best rates online! Or check our special offers for the best deals anywhere.

Have you seen all of Michelangelo’s masterpieces in Rome? Share your experiences with us in the comments below!