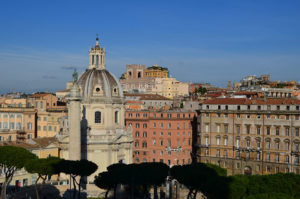 Rome Itinerary: Travel through all “3 Romes” in a Day

In its vast 2,000 year history, the city of Rome has been transformed over and over again.

Three distinct historical periods make up what are known as the “3 Romes”: Ancient Rome, the Roman Renaissance, and the so-called Third Rome spearheaded by Mussolini in the first half of the 20th century. It would take a lifetime to see and experience everything Rome has to offer – but sometimes you have to fit what you can in just a few days of vacation. So if you’re seeking to travel through time as fast as possible – for an incredibly packed day of site-seeing and history lessons – try our Rome itinerary through all “3 Romes” in a day.

This itinerary utilizes the metro to get around quickly, so have a look at our post about the Rome public transportation if you’re unsure how the metro in Rome works.

We chose to start the itinerary in a vacation apartment near Piramide (Ostiense) because it’s close to the metro stop Piramide and all the great shops and restaurants in the Ostiense neighborhood. The Roman Forum is open starting at 8:30am, so after breakfast either in your apartment or at a nearby bar for a traditional cappuccino and cornetto, catch the metro for 2 stops getting off at Colosseo. The Colosseum metro station opens right at the foot of the monument. Directly adjacent to the Colosseum is the entrance to the Roman Forum and Palatine Hill. Meander the ruins alone or with a tour* and imagine what life was like at the heart of ancient Roman society so many centuries ago. Climb the hill for spectacular views over historical center of Rome, peeking into the ruins of homes of the wealthy who resided here.

You can easily the better part of your morning exploring the area and the ruins. Your ticket to the forum is also valid for the Colosseum for either the same day or the next day. At this point you might need a little pick-me-up, whether it’s another coffee or a freshly squeezed juice. Head to the nearest bar and take a breather before making your way back to the metro en route to the Vatican.

*If you’ll be exploring the forum without a tour, it is helpful to bring along an illustrated guide that shows a photograph of the ruins with a transparent overlay of the original structure. This little bit of context helps to rebuild the city center in your imagination. From the Colosseum metro stop you’ll head toward Jonio, getting off at Termini station to switch lines. Hop on the A line (red) direction Battistini and get off at Cipro station. From there follow the signs for the Vatican Museums, which is where you’ll enter for the Sistine Chapel.

After nearly 1,000 years Rome was “reborn” with the Renaissance. A cultural center for the arts, the city transformed after several centuries of neglect and abandon during the Middle Ages. The center of Rome is often referred to as a palimpsest of styles built on top of each other. Any building might have a very ancient foundation, a first or second story built in the middle ages, and a new facade that took it into the fashion of the Renaissance. It can be tricky to notice these nuanced stylistic changes without a guide, but understanding the different layers helps to appreciate how the passage of time stamped itself on the city.

Unarguably the most marvelous example of Renaissance Rome is the Sistine Chapel which is located in what is now the Vatican Museums. Restored at the end of the 15th century, the Sistine Chapel features the stunning frescoes painted by Michelangelo toward the end of his life. If you’re dedicated to this one-day itinerary, it would be impossible to view the Vatican Museums in addition to the other two “Romes”. It is possible to view just the Sistine Chapel, but it requires a quick hustle through the museums. The chapel is truly stunning and merits a visit with time to gaze at its frescoed ceiling and admiring its genius. And on the way out you can leave the chapel via St. Peter’s Basilica, to admire those works (like Michelangelo’s Pietà) as well.

At this point, it’ll be mid-afternoon and you’ll be hungry. Stop in for a quick piece of pizza or a panini in any of the nearby places. Grab a water and a chinotto (a kind of Italian coke) and rest your feet for a few minutes. When you’ve had another coffee (how many is that now?), turn back toward the metro where you’ll make your way back to Termini and switch lines again. This time take the B Line (blue) toward Laurentina and get off at EUR Palasport. The station opens up onto the laghetto dell’eur, a beautiful artificial lake built in the 1930s that hosts summer canoe races and paddle boats. The entire EUR area was designed to support the administrative functions of the city, alleviating the historic center of Rome during a time of modernity. Wide streets lined with austere travertine-faced buildings offer a stark contrast from the decorated facades of the center. A walk around the lake is a fabulous afternoon activity on a beautiful day. Grab a gelato from Giolitti and grab a bench.

If it’s more architecture you’re looking for, check out the Basilica dei Santi Pietro e Paolo, a striking departure from the basilicas of the center. The nearby Palazzo della Civiltà Italiana, now the international headquarters for Fendi, is also known as the “Square Colosseum” and has open gallery space on its ground floor open to the public. Take a stroll down Viale Europa, the main via in EUR teeming with life, shops, and restaurants. If you’re looking for a good spot for an aperitivo, this is where you’ll find it. It’s a more tranquil part of the city with a history all of its own and worth exploring. As the sun sets, the urban landscape changes and the stoic architecture comes to life with stunning illumination.

At the end of the day, take the metro back to Piramide, just a few stops away and make your way back to your vacation apartment. In the span of a day, you’ll have experienced Rome in 3 of its most important socially, culturally, and artistically powerhouse periods. Chances are you’ll sleep pretty soundly after a day like that.

Have you visited all 3 Romes? What would you add to this itinerary? Share your thoughts and experiences in the comments below.