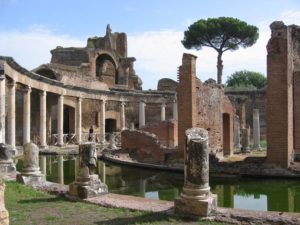 How to get to Hadrian’s Villa, Villa d’Este, and Villa Gregoriana: explore Tivoli outside the hot city center

One of the most requested locations to visit near Rome is Tivoli which is home to several ancient villas, all quite different, so you’re not limited to the historic center of Rome for incredible architectural monuments.

In this post we’ll explain how to get to each of Hadrian’s Villa, Villa d’Este, and Villa Gregoriana and what makes each villa extra special.

Without a doubt you’ll be able to find all kins of historical information about each of the villas in any tourist guide, but you may not be able to build an itinerary from the center of Rome to Tivoli with the information given. The Maritime Theater of Hadrian’s Villa

If you have your own car it’s quite easy to visit the different villas since they have ample parking. If you plan on taking a bus or train, plan on visiting a maximum of 2 villas and save the third for another day.

We’ll start with the villa that’s the furthest away from the heart of Rome, Hadrian’s Villa, the country residence of the Roman Emporer Hadrian. The villa is quite extensive, made up of several different buildings, including the well known thermal baths and the Canopus with it’s artificial lake (where the Emporer organized his massive parties).

You should plan on spending at least 2 hours visiting Hadrian’s Villa.

Reach Hadrian’s Villa by bus.
To get to Hadrian’s Villa from Rome is actually quite simple. Take Rome’s metro B line (blue) to Ponte Mammolo. From here you can catch the Co.tral bus Roma-Tivoli-Via Prenestina directly to the Hadrian’s Villa stop (Villa Adriana) which is located 300 meters from the entrance to the villa. For bus schedules, check the official Co.tral website, typing in the departure (partenza) and arrival (arrivo) stations mentioned above.

From the Tivoli station take the CAT bus n.4 for 11 stops, getting off at the Hadrian’s Villa stop (Villa Adriana). The bust stop is just 300 meters from the villa entrance. You can see all of the bus times visiting the official CAT bus website (the bus passes the station about every 40 minutes).

Villa d’Este is well known for it’s incredible collection of ancient fountains, and one of the most copied Italian gardens all over the world. It’s a magical place that truly merits a visit at some point during your stay in Rome.

To visit Villa d’Este you’ll need to turn back toward the center of Tivoli. You can pick up the CAT n.4 bus in the opposite direction where near the stop where you’d gotten off, and get off at the Piazza Garibaldi stop.

The entrance to Villa d’Este is 200 meters from here. Arguably Hadrian’s Villa and Villa d’Este are the most visited villas because they are the most beautiful, but Villa Gregoriana is well known for the splendor of it’s natural landscape.

Here you can relax a bit by taking a beautiful walk through the vegetation and among numerous waterfalls, among them the ruins of the ancient villa. The entrance to the Villa Gregoriana park is located just 300 meters from the Tivoli train station.

Have you visited Villa d’Este, Villa Adriana, and/or Villa Gregoriana? Share your experiences in the comments below!