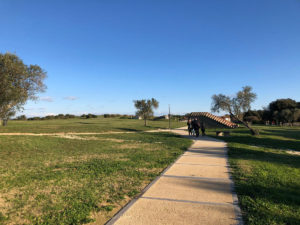 Day Trip from Rome to Tarquinia to Visit the Etruscan Necropolis

Just under 100km up the coast from Rome is the medieval city of Tarquinia, known best for it’s well preserved field of underground Etruscan burial tombs. The well-maintained park is a perfect day trip from Rome, easily reached by train, bus or car. The beautiful ancient city of Tarquinia is charming to walk around, peaking into old churches, artisanal shops, and stopping somewhere local for lunch. Meanwhile the Etruscan necropolis is just a few minutes away by foot through the more modern district. 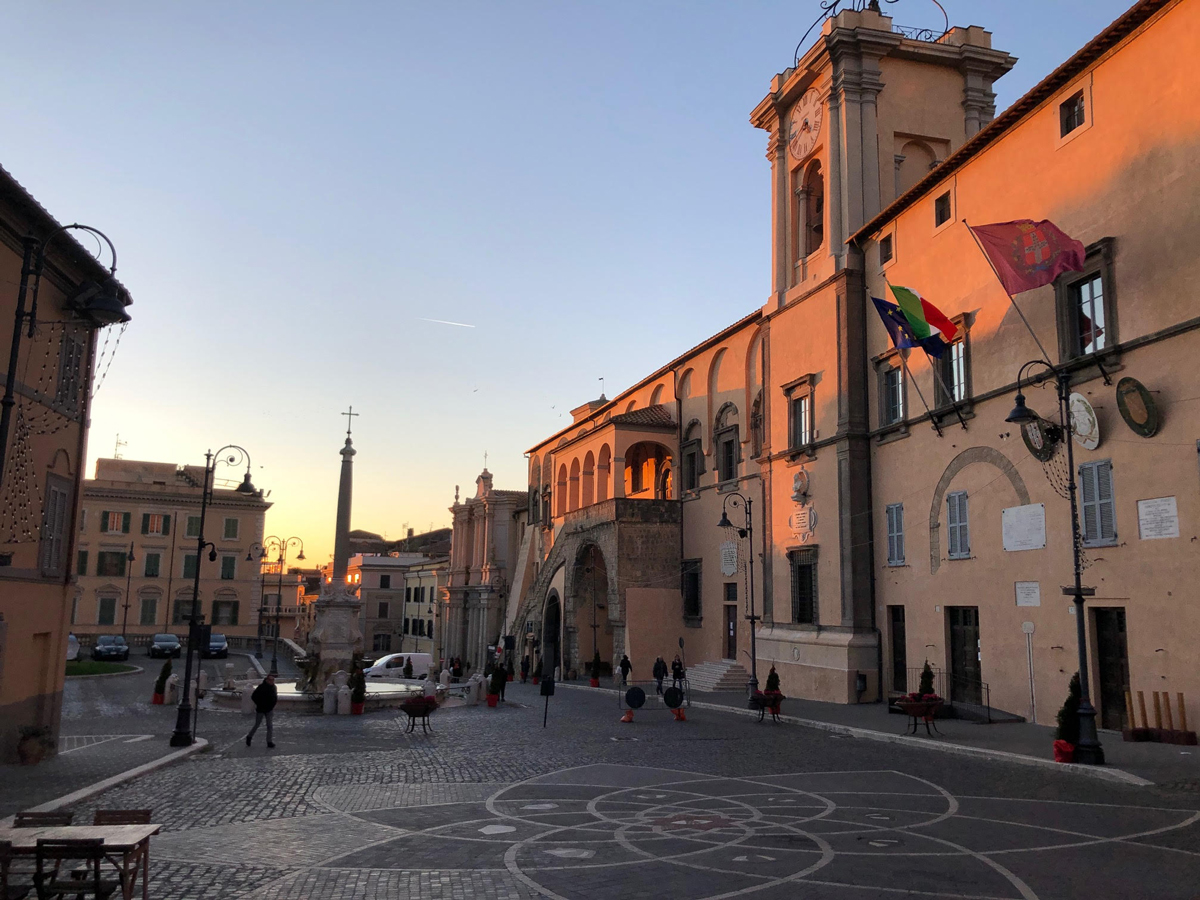 Tarquinia is a great option for families seeking to escape the congestion and crowds of Rome for a quaint town that rivals in history and culture. Just like the ancient Etruscan city of Cerveteri, Tarquinia is a protected UNESCO World Heritage Site. 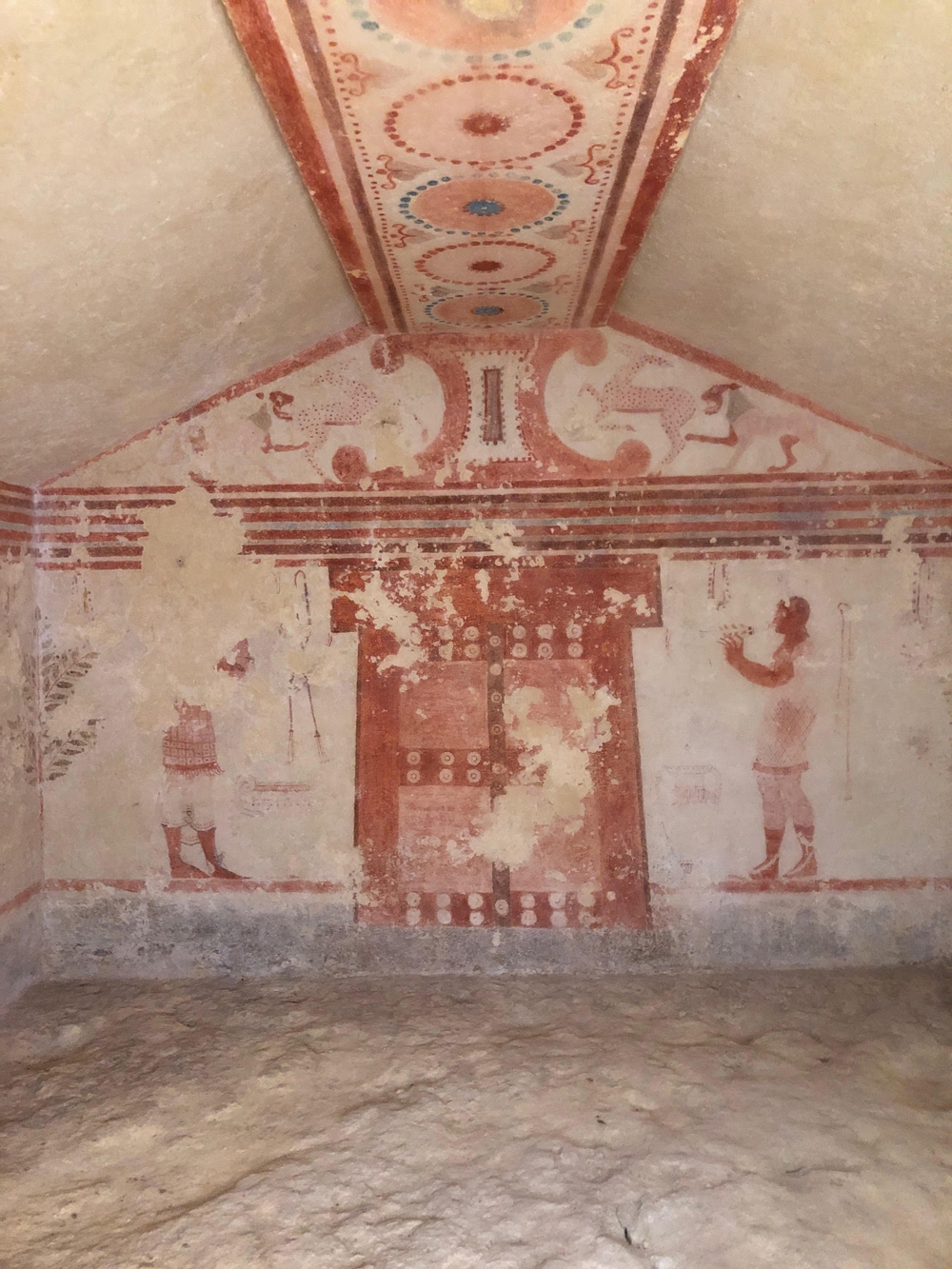 Who were the Etruscans?

The Etruscans were an ancient civilization of the Italian peninsula that was at its height from the 8th to 5th century BC until they were conquered and assimilated into the growing Roman empire. The origins of the population are controversially attributed to a subset of an ancient Greek migration, but this remains unverified.

Not much is known about typical daily life and culture of the Etruscans, but what is known has been derived from ancient Greek and Roman texts as well as elaborate burial tombs and sarcophagi that have survived nearly 3,000 years. This is what makes places like Cerveteri and Tarquinia so important in understanding this ancient civilization. 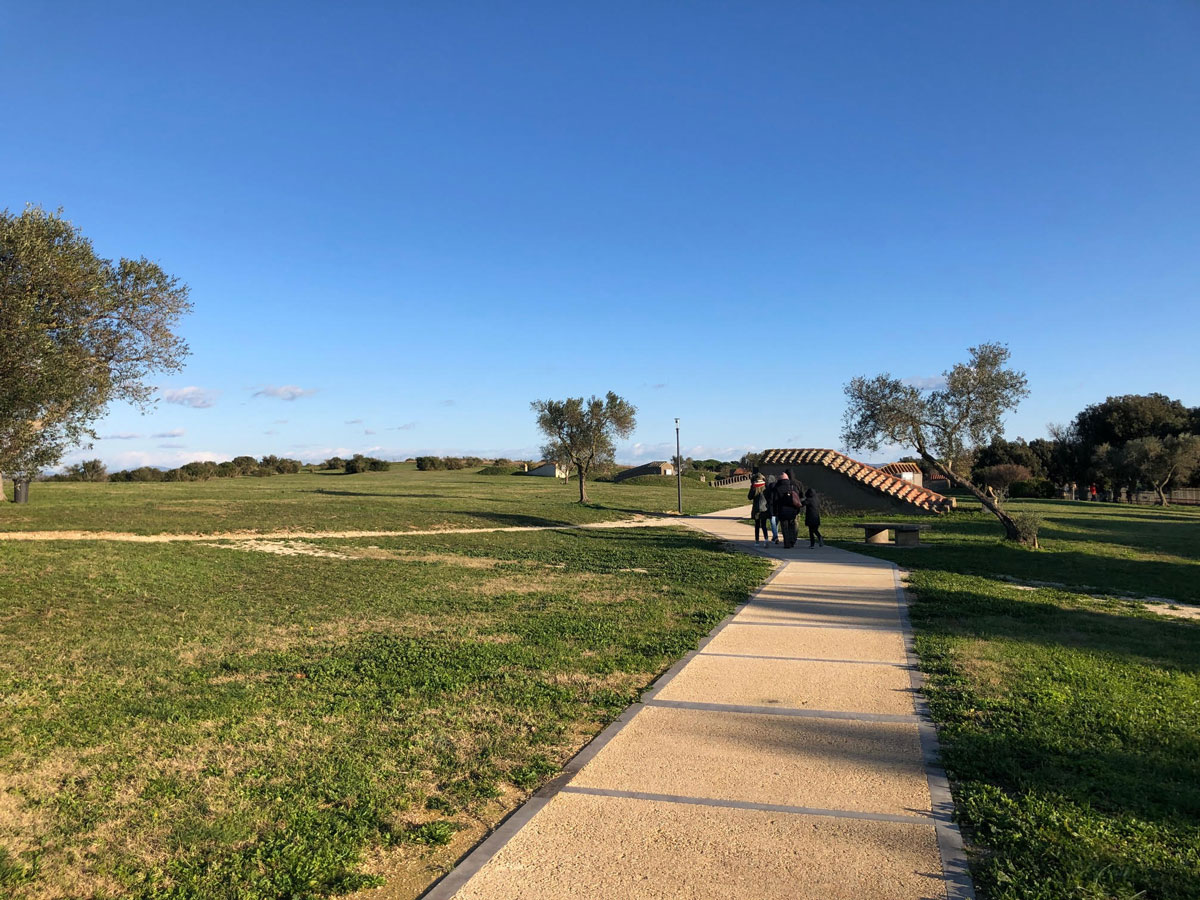 What is the Etruscan Necropolis?

The Etruscan Necropolis at Tarquinia is an elaborate network of underground tombs that have survived from nearly 3,000 years ago. The tombs feature elaborate interior paintings that were important for the deceased, particularly for life after death. Different motifs depict lavish parties with people (likely other family members, nobles, or deities) lounging around, exotic animals like leopards, and even doors that were meant to provide a smooth access to the next realm. Many of the tombs are decorated like homes, with wooden, beam ceilings, likely to make the deceased feel comfortable in their afterlife.

Apart from the interior decoration, the tombs all have “shelves” that line the inside because this is where the sarcophagi were placed with the body inside. Each tomb was dedicated to a family where all of the members would take their final resting place. The tombs visible today are of course those of wealthy and political families, as a typical family wouldn’t have had the means to afford such a lavish burial place. 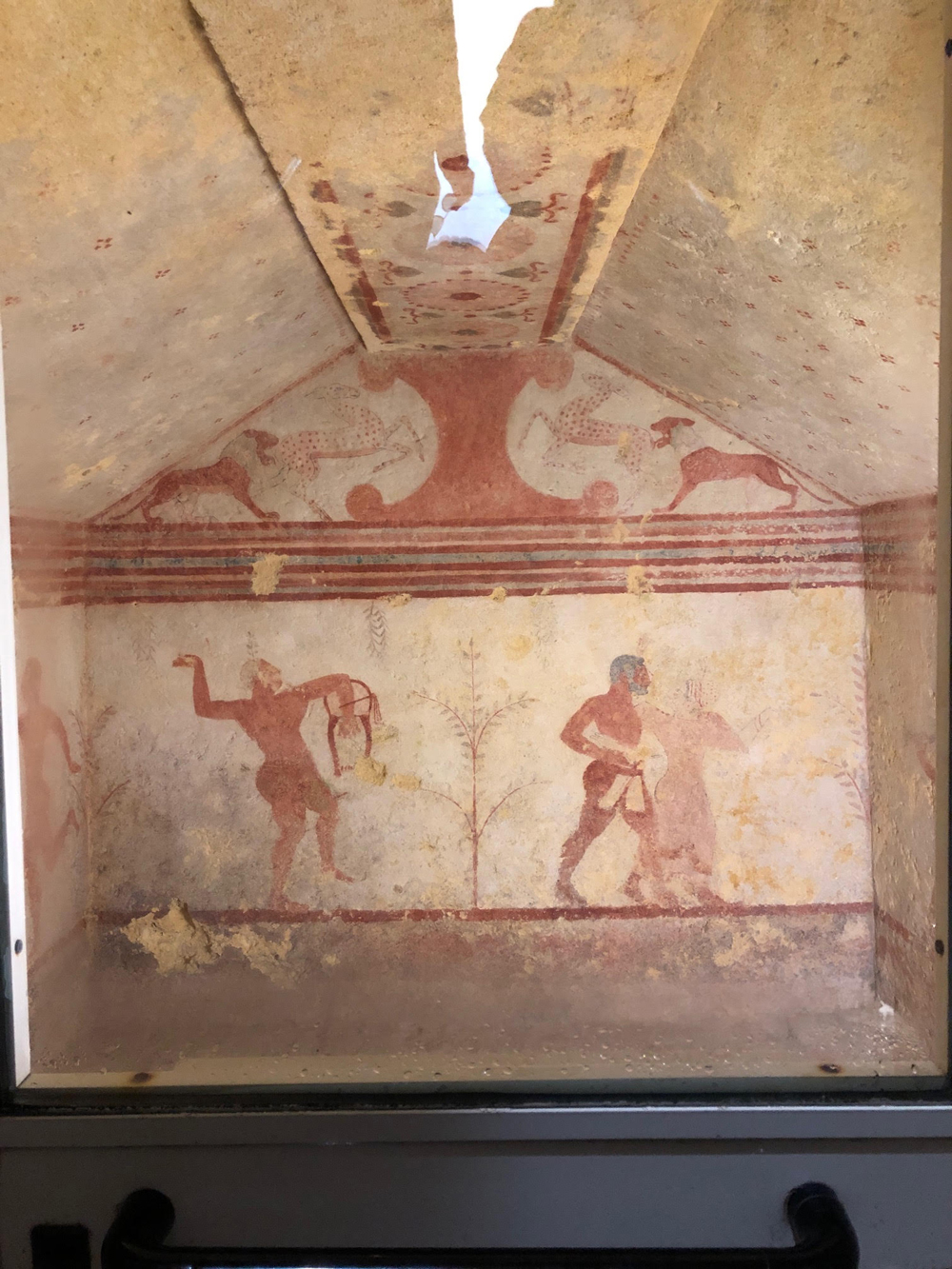 If you’re planning to visit Tarquinia and the Etruscan Necropolis, here are a few words of advice to consider before you go: 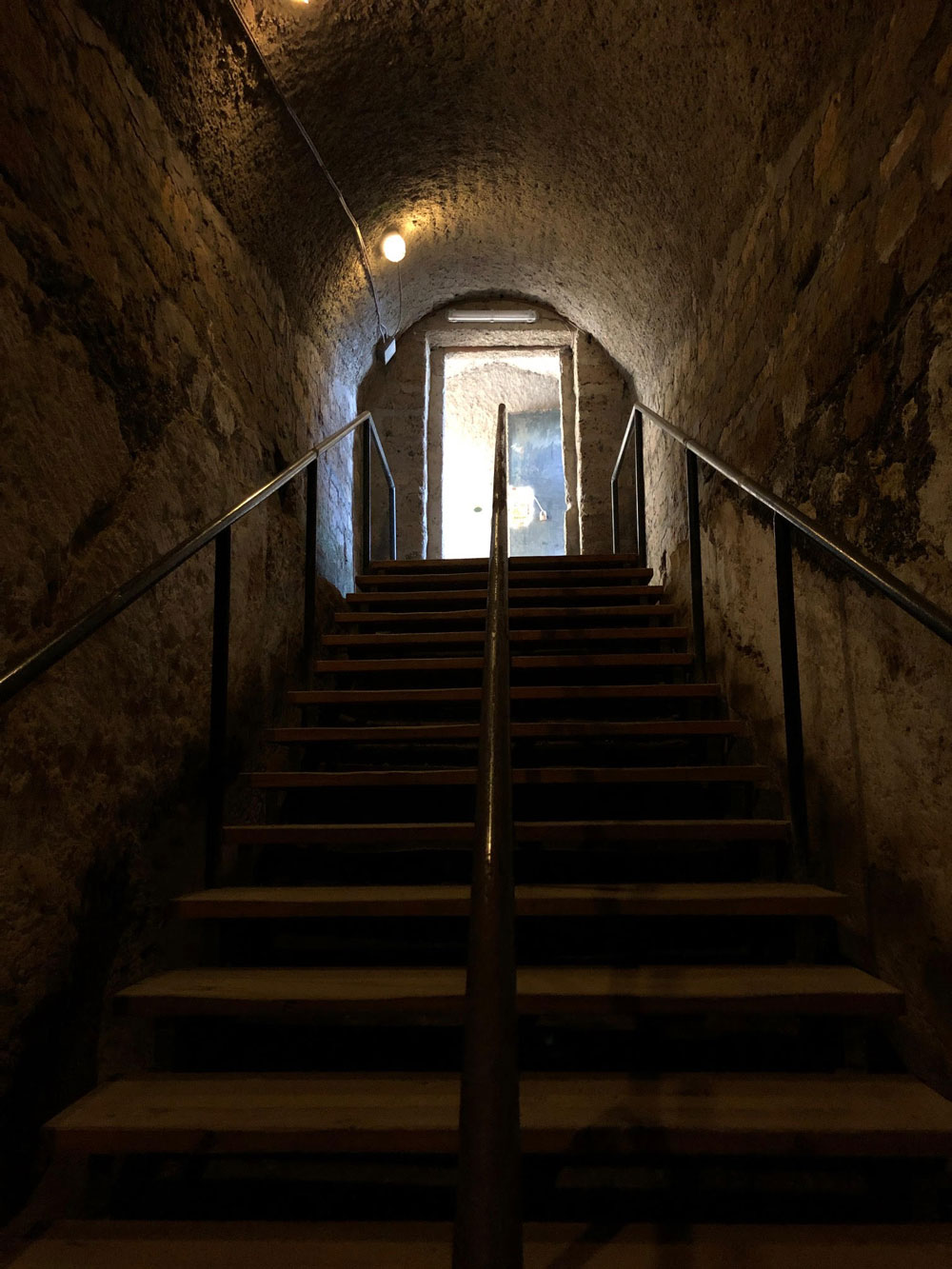 Stairs leading into one of the tombs 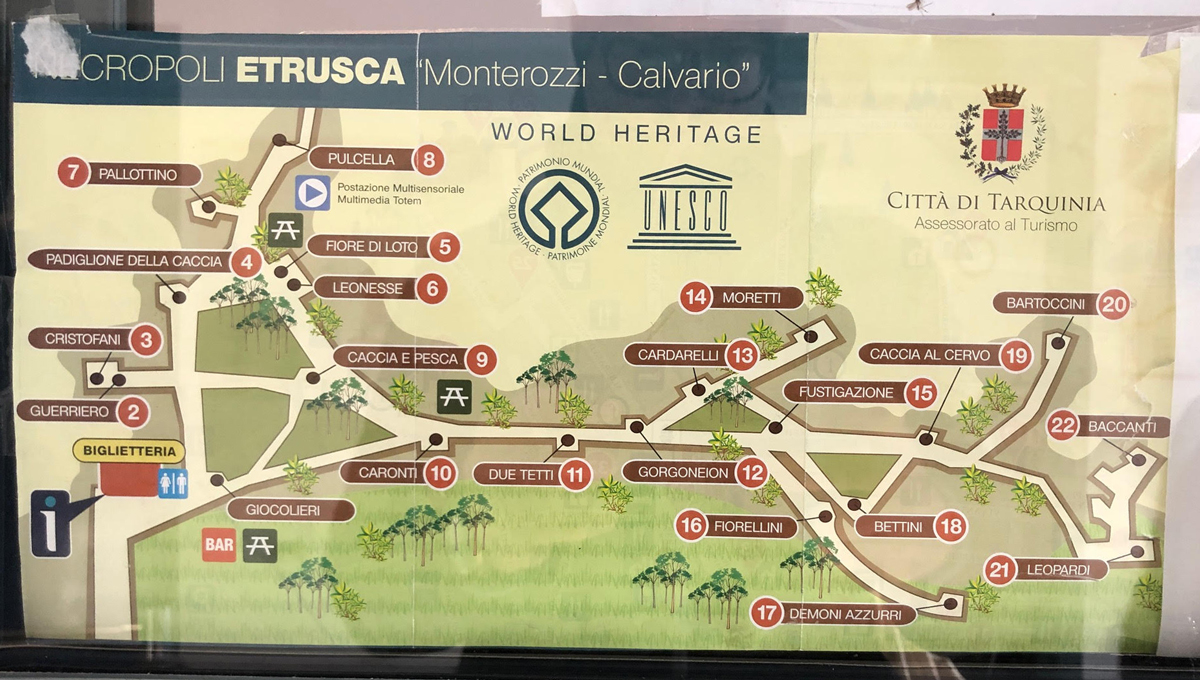 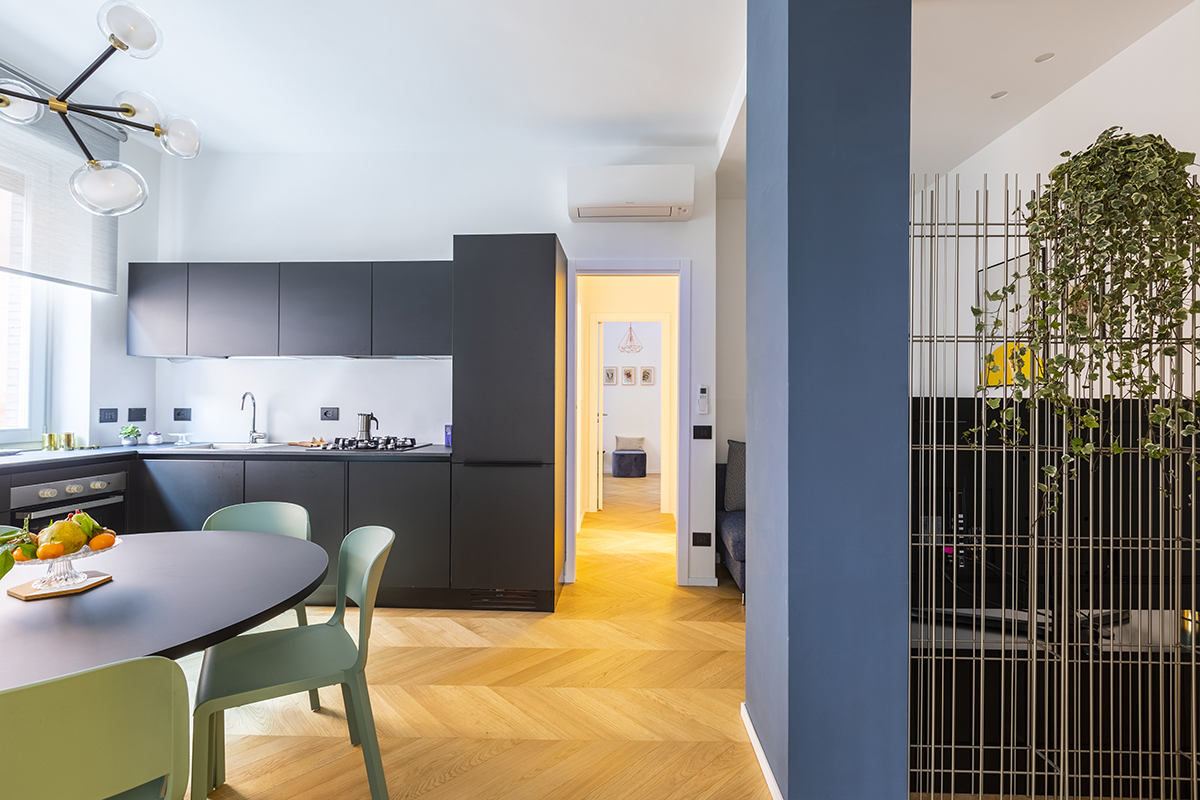 AP46 Trinity Apartment by ROMAC can host up to 7 guests in 3 bedrooms and 3 baths.

ROMAC has been welcoming international travelers to the Eternal City for 20 years. Head over to ROMAC and browse over 40 vacation rentals, for small and large groups, located in every neighborhood of Rome’s historic center. Use filters to narrow your search by neighborhood, nightly rate, number of guests, and special amenities to make your stay more comfortable and convenient.

Don’t forget to check out our special offers for the very best rates online, guaranteed!

Have you visited Tarquinia and its Etruscan necropolis? Share your experience with us in the comments below!